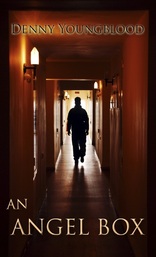 Only one person can save Laverne, Oklahoma from a sadistic prison escapee ... and this one person is also a killer, even though he is 12 years old.

When the prisoner heads to Laverne to seek his own twisted brand of revenge, he meets Harrison. Harrison is challenged with Down's syndrome, yet he manages to get inside the prisoner's mind.

When they finally meet face-to-face, the prisoner, Cellie, terrorizes the home folk like no other madman has. Harrison does his best to protect his family, but sometimes the enemy proves much stronger than he realizes. That is when Harrison comes to grips with the fact that his family will never be the same after encountering Cellie.

A native Texan, Denny Youngblood currently resides in Longview with his beautiful wife Alice. He earned his Eagle Scout award at age 16, and later went on to serve his country in the U.S. Air Force. His earned Ph.D. in Psychology has helped him to pen and create several novels, short stories, and non-fiction works. In his spare time, he enjoys drawing and painting Western art, and is also an accomplished musician. His wife, children, and grandchildren make his life complete.