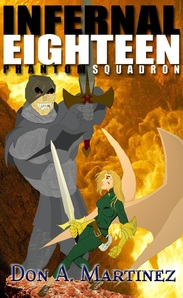 Alanna Sharpe is going to Hell ...


In hiding for half a year after discovering her father Cole Sharpe has become General Tyrelius Scolar, her feared enemy, she is brought back into the fold of the insurgency against the New Empire of America by Gabe Francis ... a man she distrusts because of his habit of holding back vital information.


Her friends still support her in her mission to reunite her family, but that mission takes an unexpected turn when the insurgents capture Scolar. Gabe reveals to Alanna that Scolar is indeed Cole, but is also simply a body lacking its original soul, that of her father.


In a quiet moment, alone with the comatose body, Alanna catches snippets of a message.


The search for her father's soul will cross over many planes of existence, from the world of the living to the mystical realm of Avalon, ultimately leading into the Inferno of Hell. Led through the many circles of damnation by a former family enemy-turned-guide, Alanna must now endure all of Hell's torments and follow her father's path if she ever wants to be reunited with him.


To have any chance of reuniting her family, Alanna must bring her father back from damnation's grasp.

Don A. Martinez, the son of two 20-year Navy veterans, holds a Bachelor’s degree in writing and a Master’s degree in English from Buffalo State College with an academic focus on myth and folklore, and is a college instructor in Texas.  He has a wife, daughter, and four cats.

About the book:
Infernal Eighteen was published February 15th, 2013. It is the fourth book in the Phantom Squadron series, and the thirteenth book produced by Desert Coyote Productions.
ISBN: 978-0-9859379-0-4
Length: 232 pages
Genre: Fantasy/Dystopia