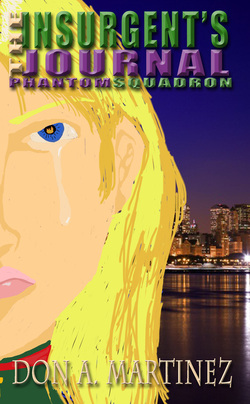 The United States is no more. The New Empire of America holds power now.

The people of the former U.S.A now live in the "glory" of President-for-Life Carleton Regent, his wife and Vice President Jennifer, and the immensely powerful Supernatural Suppression Agency.

Their goal: eliminate all supernaturals!

A victim of the SSA's purges is Alanna Sharpe, now missing her supernatural parents Ariel and Cole. Summoned by her parents' former ally Gabe Francis, she takes the burden of her Sharpe birthright ... the Sword of the Guardsman.

Gabe presents Alanna with a quest. To save her parents, she must bring down the New Empire of America!

Alanna pushes forth against the SSA and its field commander, General Tyrelius Scolar. But will Alanna be prepared for the haunting secret behind the rise of Scolar, the SSA, and the New Empire?

The proud son of two 20-year Navy veterans, Don A. Martinez holds a Bachelor's of Arts in Writing and a Master's of Arts in English from Buffalo State College, where his primary focus of study was myth and folklore. He works as a college professor in Texas, where he lives with his wife and four cats.