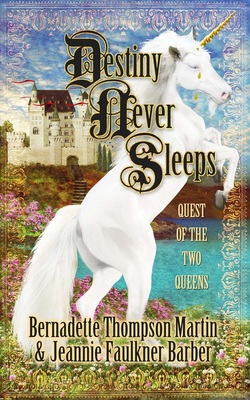 Four aging seniors set sail from Miami, but the intended destination will never be reached as they naively enter perilous waters. Deep within the Devil’s Triangle, terror lies in wait, and an inconceivable nightmare is about to begin.

A mysterious force transports Kathleen Tate (Kat) and three lifelong companions through an ancient portal. Upon emergence, they are delighted to discover their youth has been miraculously restored.

This strange parallel realm is beautiful, magical … and deadly. Two Queens — one good, one evil — will soon meet on a bloody battlefield. The quest for earthly domination, or salvation, is about to commence.

Creatures of myth and legend, of land, air, and sea, unite to battle a vile malignancy. An act of valor is needed to reverse the portal and allow the foursome to return home. However, the task comes at an unbearable cost. Many lives now rest in the fateful hand of Destiny.

Bernadette Thompson Martin
I’ve often been asked who I am, and what makes me tick. Well, I’m not anyone special — I’m simply a person with something ‘special’ to give. Writing is a gift, not only to me, but also to the many people who will come to enjoy what I’ve penned.
My background is rather humble. I was born in Philadelphia, Pennsylvania and raised in the small New Jersey city of Millville. All that I am, I owe to my Mom. She not only nurtured my body, but my heart, soul, and mind. Her teachings shaped and polished a child’s active imagination.
In 2007, my husband Ken and I left the Sunshine state and moved to the sleepy, quaint town of Cottageville, South Carolina. At long last, I sat down, gathered my tattered hatbox full of a lifetime of notes, and gave birth to the novel of my fantasies.
The story line began to take form at a very young age. Over the years, both it and I have grown expeditiously. Had I not endured the many wonderful and bizarre experiences of life, this novel would be unable to reach the level of realism and uniqueness it presents. Writing is my world, my dream — my destiny.

Jeannie Faulkner Barber
I’m a diehard Texan. Born and raised in Marshall, I now live in the East Texas piney woods of Kilgore with my wonderful husband, Monte. We have three grown sons, Joe Bryan, Adam, and Garry. They and their wives have blessed us with nine beautiful grandchildren who we love and adore. Monte and I share our home with our ‘daughter’, a black and tan mini-dachshund, Holley, who has us very well trained.
“How ‘bout them Cowboys?” Yep … I’m a true blue Dallas Cowboys fan. During game time, I can be found glued to the television. My mood depends on if they win or lose the game … poor Monte.
There are two passions in my life: writing and drag racing. I drive my own racecar, ‘Connie’, a 1981 white Monte Carlo with pink racing stripes. Monte and I even met at the dragstrip. The fun thing is I’ve won more trophies and cash at the pulse-pounding sport than he has, but still have his love and admiration. He is my beloved hero and Crew Chief.
Presently, I work for the Overton-New London Chamber of Commerce as Office Manager and Executive Vice President. I’m also a member and officer of the East Texas Writers Association (ETWA), the North East Texas Writers Organization (NETWO), and a 2007 & 2011 Award Winner of NaNoWriMo.

Now, you have some insight about these two chirpy blondes, from two dynamic states, who combined their talents, but have never met face to face — YET!

About the book:
Desiny Never Sleeps: Quest of the Two Queens is the first of the Destiny Never Sleeps series of fantasy novels, and the eleventh offering from Desert Coyote Productions.
ISBN: 978-0-9859379-1-1
Length: 364 pages
Genre: Fantasy

See the giveaway details at Goodreads.