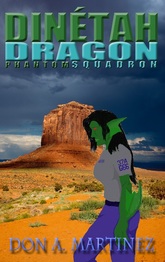 In 2015, the author discovered by accident a budget accounting for a mysterious Special Forces team operated solely by the CIA.  In questioning its origins, he was put in contact with Ariel Sharpe, one of the team's members, who agreed to meet with him in a secret location to share her story.

Ariel's life is one of isolated existence, both physically in the Arizona desert and emotionally from her surrounding peers.  The isolation becomes even greater when she volunteers for a secret government project, only to wind up bound to a genetically engineered dragon, complete with the scaly complexion and beastly abilities.  When she escapes this sinister experiment she crosses paths with a Navy man who steers her into Special Forces.

This team of professional soldiers, all of which embody legendary archetypes, becomes her new family, a place where she truly feels welcomed among people for the first time.  The team's adventures in the shadowy suprnatural world, though, hold the fate of the entire world in the balance, culminating in their final mission to stop Armageddon itself from commencing in the place where Ariel's story first began, the deserts and mesas of the American southwest.

Through pain and joy, through suicide attemps and vicious fighting, Ariel survived to tell her tale.  Learn how she not only reached a peaceful existence ... she truly earned it.
About the Author:
Don A. Martinez, the son of two 20-year Navy veterans, holds a Bachelor of Arts in writing and a Master of Arts in English from Buffalo State College, with an academic focus on myth and legend. He has a wife and two cats.